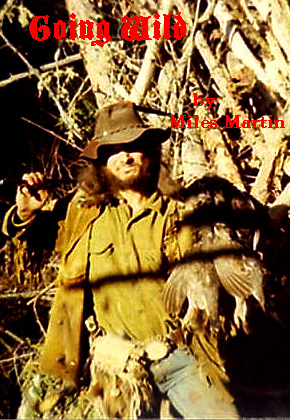 SKU:
$19.95
$18.00
$18.00
Unavailable
per item
Survival diary written in first person. First in a series. Born raised in the city, pay a pilot to drop me off in the Alaska wilderness. I walk out about a year later, after many survival adventures.   Much like 'Into the Wild' only I lived, to go on and proper for the next 45 years in the wilds of Alaska
Add to Cart
link to Utube Miles books
Chapter  1

supplies. I've heard you might have a mail route that I could get dropped off

along so the flight would be cheaper. I'm not particular where I get dropped. I'll

build a cabin, trap, and walk out in the spring." I'm trying to sound more sure,

and more mature than my 21-year age . . . so the awkward silence that follows has

me feeling defensive. I have no reason to feel this way because, after all, I've

been in Alaska three months now.

Piper Wright, the bush pilot, clears his throat. "Kind of spunky, aren't you?" I

shrug my shoulders, not knowing if this is a compliment, insult, or just a comment, but

that's how long it would be before I could walk out. I've spent my life reading all

the survival books, watching Walt Disney and such, so now it is time to make the move.

"You want to fly, or do I talk to another pilot?" After another long pause, Piper says,

"Feisty, too!" He's smiling, and seems to be contemplating an awkwardness,

confirmed when I hear, "Problem is, it will take two flights for you and all your gear.”

I'm crestfallen, having only set aside enough money for one flight, till Piper adds,

"However, I'll fly you, if you work my fish camp on the Yukon River. I can bring all

your supplies when I come to pick up salmon strips you put up for me. I've got camp

gear, a boat, a motor, but I can't pay you. You can have half the fish, and you can build a

cabin and trap there this winter."  "Sounds good to me!" Piper and I shake hands and

The bear is at my cabin door trying to get in. As I listen to the sounds, I try to determine if the bear knows I'm inside and wants me, or if the bear wants my food. The door rattles to his blows, and then the sounds stop. I see claws working their way into a crack. The wood splinters, so I'm sure the door will not hold up. My Ruger 357 magnum blackhawk is hanging on a nail by the door.  I quietly get it down. "Close encounters of the third kind." My conscience reminds me.

branch of a tree over my head. A slight breeze moves the branch up and down, up and down in a

peaceful rhythm. While I'm walking by, one of them wakes up, but does not seem afraid, maybe

because I've been feeding them all winter. The two are all fluffed up next to each other, trying to

keep warm, which seems about impossible in this 50 below cold, and them so small. Feathers fluff more, eyes open, a big yawn, expressive eyes look over at the mate to see if she's awake. Finding her asleep, he sticks his beak in her ear, wiggles his head, pulls back and goes, "tweet!". She wakes up, almost falls off the branch in surprise, but manages to cuff him with her wing and gives him a look that says, "Men!" While he twitters "he he he". There are tears in my eyes because it is so beautiful.

There are some empty cans in the garbage pit, and think there might be some food still stuck to them. These are dug up, along with some empty flour bags. The mouse turds get shaken off everything before I put it all in a pot of melted snow to cook up for stew.......

The first words I've heard in many months , "My God, you smell like a forest fire!", greet me as the helicopter doors open, slide shut behind me, shutting out the swirling -50 below snow.....

Under the double rainbow a bald eagle sitting on top of a driftwood pile on the Yukon river, turns his head as a robins song wrinkles the silence. Neither knows I'm about to kill a moose.

The guy from hippie hill hands me a Mother Earth magazine, opened to the "personals" section.

His finger on the one he wants me to read. "Woman, 19 seeks soul mate, likes outdoors. Good

looking."I answer the add, later place my own. Over the next few weeks I got hundreds, shopping bags full of letters from women who want to live in the wilderness with me. 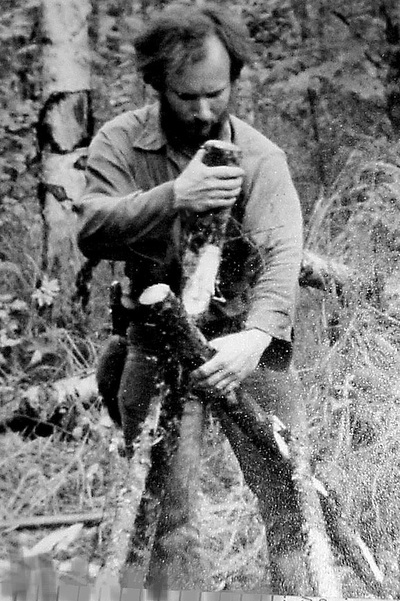 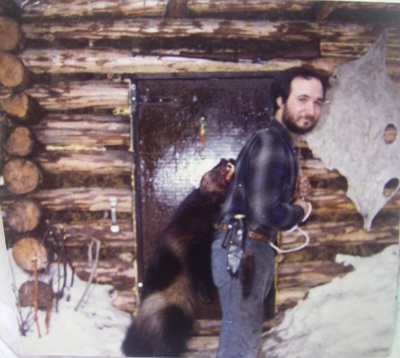 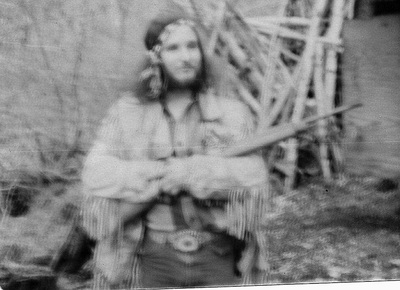 early 70's made my own clothes from leather I killed and tanned. Hunting with black powder 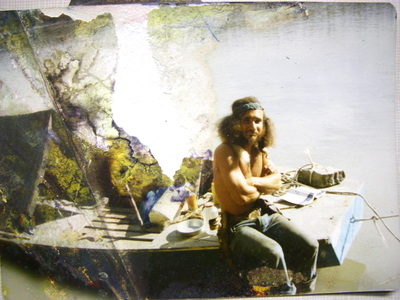 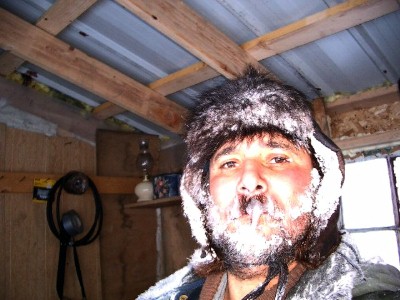 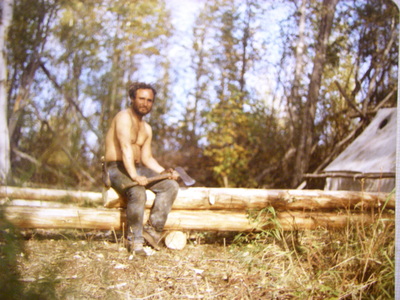 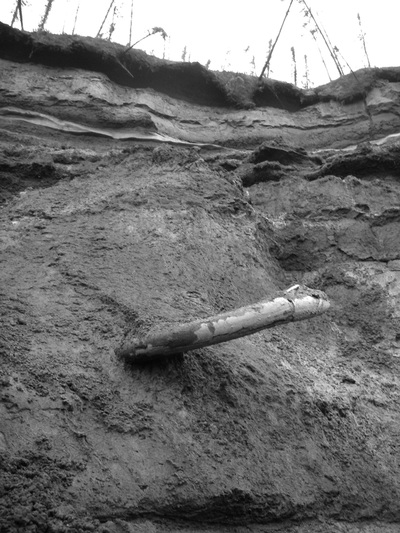 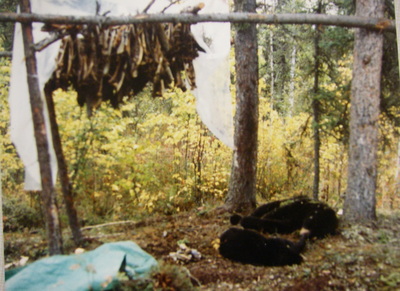